There is a stark difference between the government’s current attitude towards legal and illegal cigarette manufacturers – a difference that raises serious questions about the government’s commitment to action against those who pose a very real threat to consumers, legal tobacco value chain and the national tax authorities.

The contrasts were clearly manifested in two events over the past month.

The number one event was a fundraiser for the African National Congress held alongside its policy conference in late July. Photos posted on social media by the Fair Trade Independent Tobacco Association (Fita) show the association’s representatives posing proudly with ANC leaders such as Panyaza Lesufi (President of Gauteng of the ANC and MEC of the province for education, responsible for school children); General Treasurer Paul Mashatile, head of fundraising for the movement; and the president himself, Cyril Ramaphosa, who is the head of state.

Admittedly, it was not a government event – ​​but it was called by the ruling party, through the Progressive Business Forum, which presumably has a very strong mandate from the ruling party.

So what signal does this photo opportunity send to the people of South Africa?

Without being melodramatic, it shows a deeply disturbing closeness to the government of an organization whose members are effectively the champions of the illicit tobacco trade in South Africa.

Members of Fita include, at various times in its history, Carnilinx, Folha Manufacturers, Home of Cut Rag and East London-based Protabac (recently closed by SARS for a long period for failure to comply with regulations on the use production counters).

Some of the manufacturer names mentioned may be unfamiliar to many South Africans. But for those of us involved in the legal tobacco trade – in other words, those who pay excise duties and taxes to the government – ​​know that their products now account for over 70% of cigarettes sold in Africa. south today.

How do we know? It’s all in the price.

According to current tariff codes and regulations, manufacturers must pay R19.82 in excise duty for each pack of 20 cigarettes sold, together with the required VAT, making the total due to SARS for each pack of 20 cigarettes is at least R22.79. And that’s just the excise and tax costs – this excludes the manufacturer’s margin and all costs related to production, foils, materials, supply chain, retail and sales margins. big.

Anything sold below a price of R27 can therefore be considered an illicit product. And this is precisely the space in which the members of Fita operate. 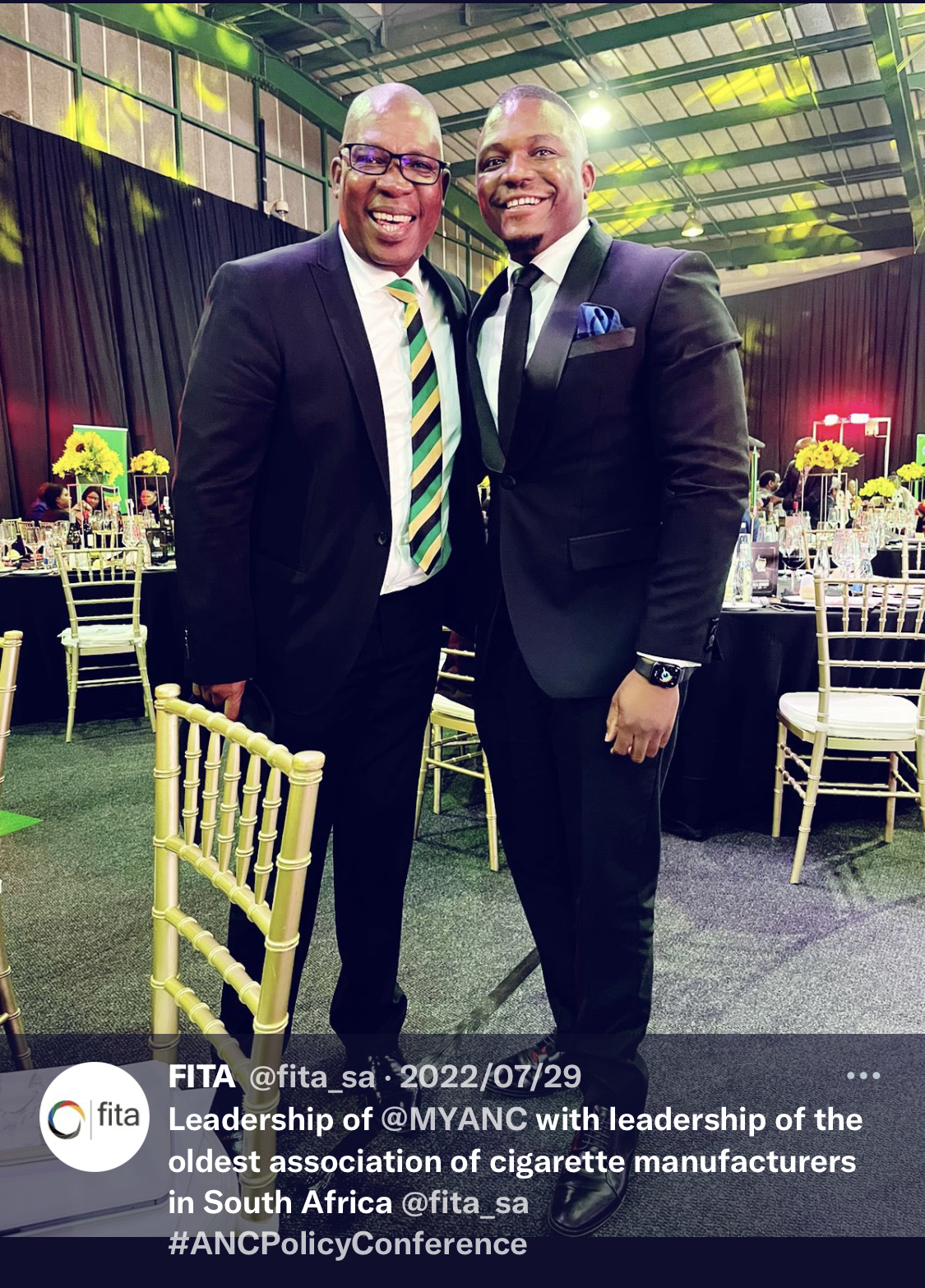 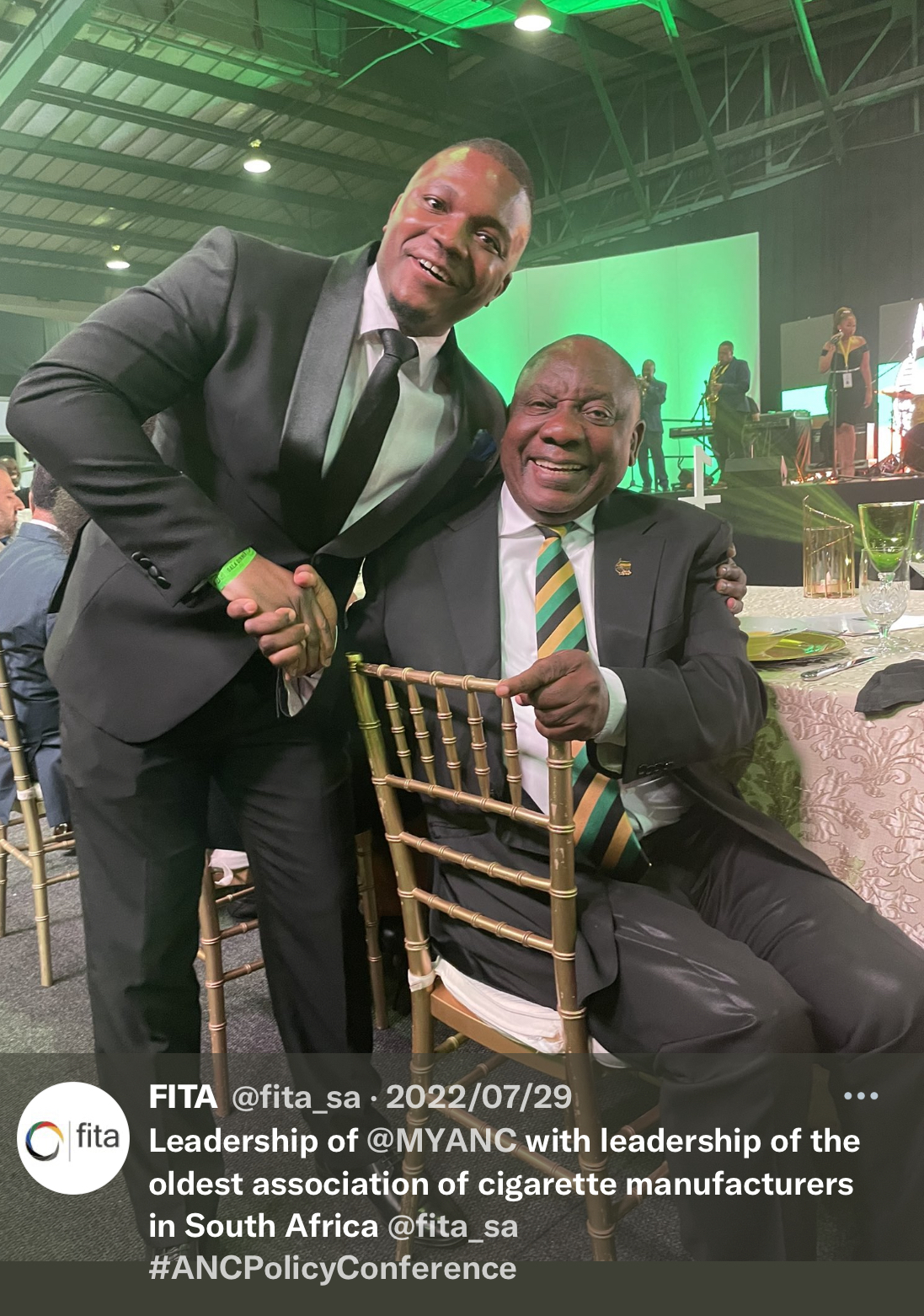 The Ipsos study in question – published in April this year – is based on surveys of 151,000 outlets in South Africa. It’s the most comprehensive and reliable source of knowledge about who’s selling what and where – and it shows that the illicit market continues to grow and grow and grow.

This growth was significant even before the Covid-19 ban on the sale of cigarettes. But it entered a boom period when consumers were forced into hiding and relying on backdoor, ie illicit, cigarettes. And although the lockdown ban has long ended, the illicit sector’s stranglehold has remained in place – so much so that our member organizations describe it as “a national emergency”.

So, do the ANC leaders who have happily posed for photos with the Fita leadership know that they are indeed taking the leadership of an organized tax evasion ring? If they don’t, they certainly should, especially since the government seems so concerned about tobacco products that it wants to change the laws governing their sale.

This brings us to event number two: the recent publication of the findings of the South African Medical Research Council study global adult tobacco surveyduring a round table including representatives of the Ministry of Health.

The recommendations for change that have been put forward by the Department of Health to address changing smoking habits appear to have been developed in complete isolation from current market and economic realities. And their proposals will likely only enhance the size of the economic playing field that the illicit sector has built for itself, rather than inhibit it.

Among other things, the Ministry of Health is now proposing plain packaging on all cigarettes sold and a ban on point-of-sale advertising.

You don’t have to be a marketing graduate to realize the impact this will have on the gray goods that are already being sold in outlets across the country. Globally, plain packaging has been found to have little effect on smoking levels. In many cases, this has actually facilitated the illicit trade and increased underage cigarette smoking, and there is a growing view that it simply does not work.

So why, at a time when we need everyone on deck to fight the illicit sector, is the government focusing on those doing their jobs legally? Why put in place even stricter regulations on a sector which, unlike illicit criminals, contributes more than 13 billion rand per year to the national tax authorities and follows all laws and regulations to the letter?

A smoke-free society will remain a pipe dream, if you will excuse the pun, if attempts to achieve it simply result in more and more people smoking illicit products.

As the South African Tobacco Processing Alliance (Satta), we have been heartened in recent months by a marked increase in law enforcement against some of the Fita members who continue to operate illegally. There have been major raids and notable confiscations, and we appreciate that.

In particular, ask the emerging black tobacco growers who have checked every legal box imaginable in their quest to produce legal compliant tobacco products. Struggling with small pockets of land, without state assistance – despite state insistence on rural reform, rural economic development and black economic development – they are going bankrupt, one by one, as the size of the legal tobacco market is shrinking.

They are at the starting point of the value chain, and any decrease in retail sales trickles back – the legal manufacturers sell less, so they make fewer cigarettes, which lowers the demand for processed tobacco leaves, thus decreasing demand among those who grow tobacco.

Over 100 black tobacco growers have already left the industry, and we as Satta have been forced to find new ways to earn a living for the remaining handful. Some are considering growing alternative crops; others hope to ride the wave of the emerging cannabis industry.

Wherever we can, we work with provincial governments to secure the future of the industry, and dark tobacco growers in particular. We had a particularly good response from Mpumalanga and the Eastern Cape, where there is real concern about the sector which sometimes seems to contradict what we are experiencing at national level.

The leaders of these provinces are keen to involve their provincial economic development agencies in finding ways to secure a future — any future — for those dislodged by the rampant growth of the illicit sector.

This may be because provincial governments are closer to the “people” than the national government and recognize economic suffering when they see it – and are therefore more focused on stimulating legitimate economic activity that particularly benefits to black rural farmers. Either way, it’s encouraging.

The road ahead is increasingly difficult for the people at the center of South Africa’s 120-year-old legal tobacco industry. The contradictions in the government’s posture are there for all to see.

Who knows where and when it will end — and what will be said of the government’s role in writing the industry’s obituary? DM