Sixteen of India’s 35 states and union territories (UTs) lag in the national average score of the NITI Aayog Energy and Climate Index, designed to measure various factors of energy efficiency and climate resilience.

The State Energy and Climate Index is India’s first-ever index, aiming to track the efforts made by states and UTs in the climate and energy sector and provides in-depth analysis of individual states to help improve their performance in the sector.

The index aims to encourage healthy competition among states on different energy and climate dimensions by ranking them on their efforts to improve energy access, energy consumption, energy efficiency and Environmental Protection.

An iterative method was followed to reach the final set of indicators with follow-up meetings held with industry experts. The indicators were selected based on their importance and the availability of reliable annual data from existing data sources; the data used for this analysis is from 2019 to 2020. And for better comparison, the states have been categorized into large states, small states, and union territories.

After analyzing all the indicators, India’s overall score stood at 40.6.

The analysis revealed that Gujarat with an average score of 50.1, Kerala with 49.1 and Punjab with 48.6 were the top three performers among the large states. 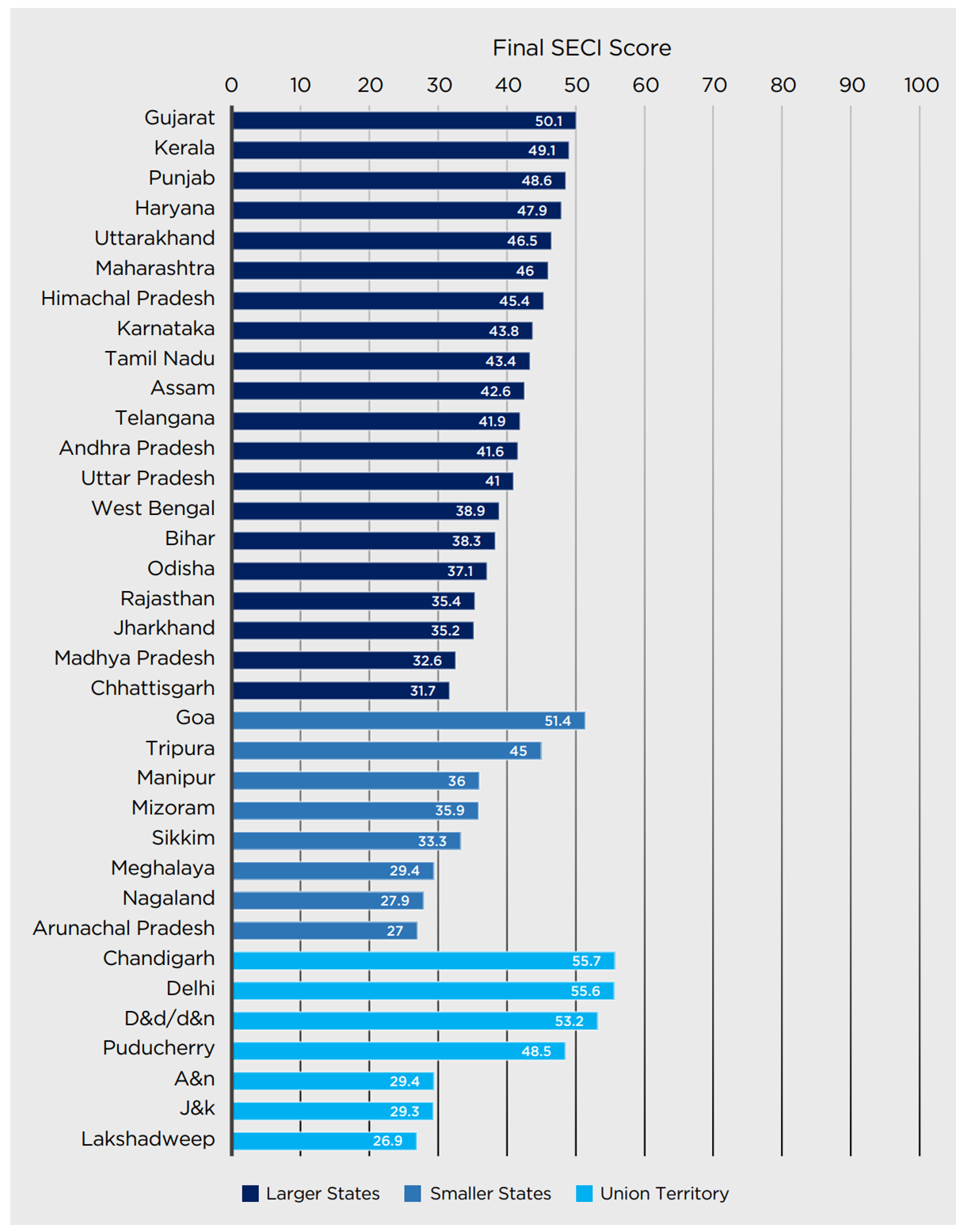 Goa became the top performing state in the “small states” category with a score of 51.4, followed by Tripura with 45 and Manipur with 36. Among UTs, Chandigarh at 55.7, Delhi at 55.6 , Daman and Diu and Dadra and Nagar Haveli at 53.2 was rated as performing.

Although Gujarat is the best performing state, its performance in terms of environmental sustainability and new initiatives needs to be improved, according to the analysis.

Arunachal Pradesh had the lowest score among small states at 27, alongside Nagaland and Meghalaya at 27.9 and 29.4. Lakshadweep, with an average of 26.9, was at the bottom of the list of union territories.

The three UTs and two states that scored above 50 were Chandigarh, Delhi, Daman & Diu, Dadra & Nagar Haveli, and Gujarat & Goa. Overall, although more than half of the states scored above the average value (40.6), there were a total of 16 states and union territories that trailed behind.

The overall score of the index and the scores obtained for each parameter leave room for huge improvements, suggesting that while India may possess a favorable energy environment and policies, this does not necessarily translate into the transformation of the sector.

The report suggests that most low-scoring states faced higher overall technical and commercial (AT&C) losses and complex rate structures with their respective DISCOMs. It recommends that state DISCOMs could benefit from aggressive use of the central government’s revamped reform program to modernize their infrastructure and distribution systems.

Shri Amitabh Kant, CEO of NITI Aayog, said, “Achieving the ambitious climate goals would require a conducive policy environment to encourage investment. The State Energy & Climate Index Round-I will help initiate dialogue with states on the energy sector so that necessary policy improvements can be made.

In August last year, NITI Aayog and Rocky Mountain Institute (RMI) analyzed lessons and best practices from national and global experience to help state governments consider further reforms to put their electricity distribution on the road to efficiency and profitability.

Satish Shetty is an auditor at Mercom India. Prior to Mercom, Satish was a multimedia news producer at Reuters, where he gained experience in digital news media. Satish holds a Bachelor of Arts (BA) in Broadcast Journalism from Limkokwing University of Creative Technology, Malaysia. More articles from Satish Shetty.